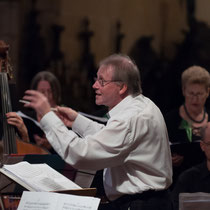 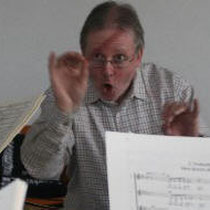 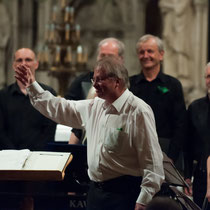 Colin Cartwright studied piano and singing as a counter-tenor, or male alto, at one of Great Britain’s leading music conservatoires, The Royal Northern College of Music in Manchester, where he  sang the role of Oberon in Benjamin Britten’s “Midsummer Night’s Dream”. While there he met and married his wife Anne who was on the Opera Course.

In 1975 following graduation, they both moved to live in a house in Windsor Castle… yes! the Windsor Castle, where Colin was appointed as a member of the choir of the Royal Chapel of St. George.  While Anne expanded her career to become a soloist in opera houses throughout Europe, Colin became immersed in the great British choral tradition and during the next 30 years, not only did he sing daily in the Royal Chapel, often providing the music for significant Royal & National events, but also extended his musical activities, including conducting an award-winning girls choir (the choir of the Brigidine School, Windsor) which performed all over Europe. He also conducted local choral societies and operatic groups.

During his time at Windsor Colin recorded an impressive collection of British and European choral works as well as singing in St. Paul’s Cathedral, Westminster Abbey and The Royal Albert Hall London. In fact it would be difficult to name a cathedral or important concert hall in which he has not performed.

Highlights of Colin’s career have included tours of the USA and an invitation to sing in America at a memorial service for the victims of 9/11 in New York; singing as a soloist for Her Majesty Queen Elizabeth’s 70th Birthday concert; and also for being invited to sing at the marriage of The Prince of Wales and the Duchess of Cornwall. Following this he received a personal gift of a piece of the Royal Wedding Cake which sits un-eaten in its decorative container on his piano!

Colin received the award of the Golden Spurs for his work with his girls’ choir in Belgium and most notably, he was awarded The Royal Victorian Order (an order in the personal gift of Her Majesty the Queen for members of the Royal Household) for services to music in 2006.

2006 was another significant year when Colin and Anne moved to the Limousin close to Rochechouart – in theory to retire,  but life is very busy for both them as Anne teaches singing and Colin is musical director of recently-formed “Cantique”, an international choir containing French, Dutch, American, and British members.

Colin has brought all his talents and his immense wealth of experience to France and his greatest desire is to share music-making with as many people as possible in his much-loved new country of residence.